Kenneth first came to ORH at the age of one in 2006 after his mother went to her local Health Centre and was advised to come and see us in April while we were here. The 3rd child in a family of four, Kenneth is the only child affected by a cleft palate and lip.

In 2006 he received surgery for his cleft lip and in 2007 we operated on his palate, with a beautiful result. Kenneth's father, who works as a waiter and his mother are both thrilled with the result and overjoyed that their little boy has been given the opportunity for a better future in life. 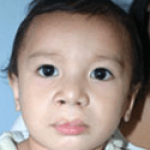